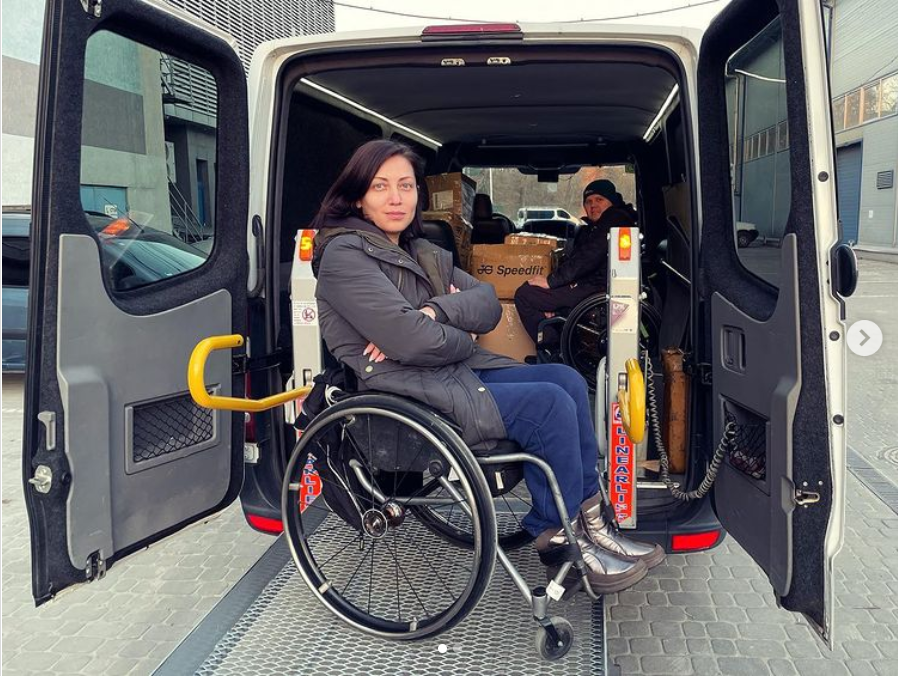 War Never Asks About Your Disability: The story of how Uliana Pchiolkina Evacuated from Bucha, Ukraine

Public activist, sportswoman and TV presenter Uliana Pchiolkina along with her husband, Vitaliy, were in their apartment the morning of Feb. 24, when Russian troops invaded Ukraine. The two had moved to that apartment in 2015 and furnished the space to be as comfortable as possible and to feel independent from outside help because Uliana and Vitaliy are persons with disabilities, who use wheelchairs. But that Feb. 24 morning, they along with thousands of other persons with disabilities in Ukraine, were not ready for war. They couldn’t flee to a bomb shelter, or go to buy food and vitally important drugs on their own.

However, Uliana and her husband were lucky – they managed to evacuate from Bucha, during an active battle between the Russian invaders and the Armed Forces of Ukraine. Now, the couple are helping other people with disabilities, and working with the organization ‘Active Rehabilitation Group’.

In the following interview for Learning, Acting and Building for Rehabilitation in Health Systems (ReLAB-HS), Uliana Pchiolkina tells how persons needing rehabilitation are rescuing themselves in the war conditions, what support they need, and how they can connect with resources and services.

Life for all Ukrainians is now divided into before and after Feb. 24. If possible, please, recall your situation on that very morning when the full–scale invasion was launched?

Everybody kept saying Putin would attack us … But we did not take this information seriously. That is why, when the war broke out, I felt absolutely. helpless – something I had been fighting not to feel for so long. The war brought this feeling back, because when you move in a wheelchair, you cannot either hide, or flee. It becomes much more difficult to rescue oneself when there is a direct threat to life. I realized again I was becoming dependent on other people’s assistance. And that was always the most awful thing for me.

I got my spinal cord injury at the age of 21. I even tried to commit suicide since I did not imagine how I could be independent in a wheelchair. Then I overcame that feeling. I had to really take pains to arrange some independent space for life and work. And then the war came…

On the second day of the war, we, together with active rehabilitation leaders, started establishing a coordination hub in order to get united, exchange ideas, and plan help for persons with disabilities. We started thinking how we could live with no hygiene items in case of incontinence, which is a side effect of spinal cord injury. I advised looking for Foley catheters since, pampers or single-use catheters can be inaccessible and so on.

Tell about the days you spent in Bucha before the evacuation. Where did you hide, during air alarms, were there any problems with food?

You cannot enter any single bunker in a wheelchair, so we did not have any other choice but to stay in our apartment. I can tell you right away, it’s not only people in wheelchairs who have problems accessing shelters … There are, in fact, a lot of such cases, but due to stress people often just filter such information out.

So, from Feb. 24 to March 9 we stayed in our apartment. I wrote the mayor of Bucha a couple of days before the war broke out asking how could persons with disabilities be evacuated. He answered: ‘They will come to pick you up.’ Of course, no one came specifically to take us. It was possible to leave the town more or less safely only on the first day before noon. While some people with disabilities, of whom there are some two thousand in Bucha, just stayed in town. Some of them have severe form of cerebral palsy, some are bed-ridden.

The moment the war started, our neighbors from the fourth floor came to live in our one-room apartment: a husband with a wife and two children and their pets – a dog, a cat, and two hamsters. It was funny. So there was someone to help us. There were no problems with food or hot water. But when the utilities were cut off – we cooked on a fire near the building. It was cold, but we managed to get by.

I know that it is highly difficult for people with disabilities to leave their own comfortable, well-furnished space, but, believe me, when firing starts at your apartments – there will be fewer chances to get rescued.

So how did you still manage to flee Bucha?

On March 9, we decided to leave the town by car. I was driving our car, while my husband was driving the micro bus that belongs to the organization in which we are employed. Thus, we could also take our neighbors who also wanted to evacuate. While driving through Bucha, I saw many civilian cars shot at, and in one of them there was a dead body. We also saw an ambulance shot at. Russian invaders were going here and there in armored vehicles. And we were just lucky that they did not decide to also shoot at our cars. The sounds of explosions, firing could be heard everywhere.

We went through Russian checkpoints where they made a search, checked the documents, and also looked for [dashcams] … We later learned that our apartment in Bucha had been robbed by Russian military men and the door is broken.

How does the Active Rehabilitation Group work now in the conditions of war? How do you arrange help for those who need it?

We have developed a questionnaire on our website for persons with disabilities where they can tell us of their needs. Then our staff members come into contact with these people and discuss their specific case in detail. We send incontinence items, wheelchairs etc. to those in need. It is important to stress that we provide assistance to people with spinal cord injuries and using a wheelchair, but requests keep coming to our organization from different categories of people with disabilities.

We are looking for volunteers in different cities who could bring food or medicine to people’s homes, or just visit and ask if they are all right, what they need, and how we can help. Humanitarian aid is often brought to cities, and people simply cannot come for it. Everyone can help … Contact your local government, social services and ask how they help people with disabilities, and what they do.

How should the war change the understanding of the needs and opportunities of people with disabilities?

I’d say that no building should be built without an accessible bomb shelter, and the evacuation plan should be drawn up for people, depending on what kind of disability they have. I think the best example here should be the experience of Israel, where all these things are well thought out and where, among other things, people with disabilities can serve in the army. And rightly so, because we can work in, say, cyber troops … People with disabilities need help, but they also need to be part of society and their country.

ReLAB-HS is made possible by the generous support of the American people through the United States Agency for International Development.