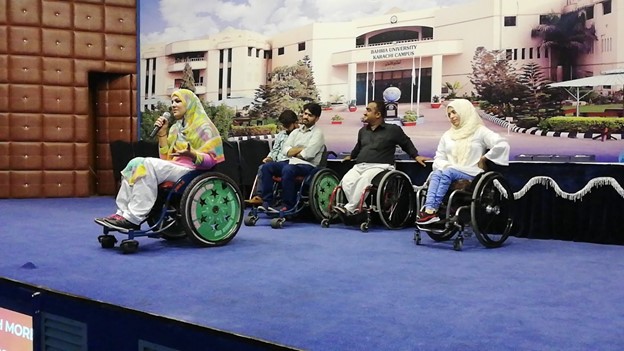 Independent Living Centres: A Platform to Bring Back People to Their Lives

By Assad Abbas Malik for ReLAB-HS

Shortly after her marriage in 2012, Dr. Zaib Taj was excited to return home to visit her family in February 2012 at her father’s invitation. She was in a good mood and excited to visit her home, but as part of tradition, Zaib, the newlywed, wanted to buy some gifts for her father and family. Therefore, she asked her brother-in-law to drive her to the nearest market to buy some gifts.

“Everything was going swimmingly as we left,” Taj said. “We were on our way to the market, and I was just talking with my sister-in-law about what to get my parents. My brother-in-law was also giving me some suggestions for gifts for my father. My life was on a very normal track till the time we met with an incident,” Taj said.

She suffered a spinal cord injury as a result of a gunshot during a road rage incident. She was permanently disabled and divorced by her husband who was unwilling to support a physically disabled wife. It was not easy for her to accept this new chapter of life. She confined herself to her home and abandoned all social activities. This years-long isolation had her feeling full of self-pity, and she even considered suicide.

“It was not easy to recover from trauma,” she said. “It took me so many years to realize that my life was no longer without a physical disability. “However, it is often in the darkest skies that we see the brightest stars.”

In 2019, Taj was connected to a Humanity & Inclusion supported Independent Living Centre (ILC) in Karachi after spending a long time at home battling her fears and trauma. She didn’t like going out in public after the incident; however, it was a new experience for her, seeing herself among a number of wheelchair users, living their lives even though they got around by wheelchairs.

Dr. Zaib Taj works on a presentation to deliver a counseling session at ILC.
Photo by DWA

“When I came to this ILC, I realized that even when paralyzed, there are endless possibilities to living a quality life, she said. “I saw people and young girls working on computers, completing assignments, delivering trainings, painting, or giving speeches. It was encouraged to see this all as being one of the communities I was a part of now. I began to feel better and more encouraged with every passing day soon after arriving at this ILC. I was an introvert for the first seven years of my loneliness. However, the atmosphere at this ILC has assisted me in resuming my life.”

Taj is now the coordinator of the women’s wing and a champion at an ILC. She has attended numerous trainings on disability and rehabilitation, and she has represented women on wheels on a variety of platforms. She represented Humanity and Inclusion at an UN-WOMEN summit on empowering women with disabilities held in Islamabad.

In her message for women with any kind of disability, she urges them to come forward, embrace the life and unleash their hidden potential.

“I want to tell the people, especially women with disability to not underestimate ourselves and we should come forward to play a productive role in society and of those who need our assistance in making a path to reclaim their rights and development,” Taj said. 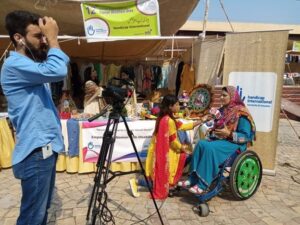 Dr. Zaib Taj is interviewed while representing women with disabilities at an exhibition, organized by Humanity & Inclusion, in Islamabad.
Photo by DWA

Humanity & Inclusion, as part of Learning, Acting and Building for Rehabilitation in Health Systems (ReLAB-HS), is collaborating with the government of Pakistan at national and provincial levels along with other stakeholders, such as organizations of persons with disabilities, to ensure an inclusive approach to integration of rehabilitation and assistive technology in strengthened health systems. ReLAB-HS will work to organize capacity-building trainings for health professionals and users of rehabilitation and assistive technology services through various local platforms and outlets, including ILCs.

ReLAB-HS is made possible by the generous support of the American people through the United States Agency for International Development.

We use cookies on our website to give you the most relevant experience by remembering your preferences and repeat visits. By clicking “Accept All”, you consent to the use of ALL the cookies. However, you may visit "Cookie Settings" to provide a controlled consent.
Cookie SettingsAccept All
Manage consent

This website uses cookies to improve your experience while you navigate through the website. Out of these, the cookies that are categorized as necessary are stored on your browser as they are essential for the working of basic functionalities of the website. We also use third-party cookies that help us analyze and understand how you use this website. These cookies will be stored in your browser only with your consent. You also have the option to opt-out of these cookies. But opting out of some of these cookies may affect your browsing experience.
Necessary Always Enabled
Necessary cookies are absolutely essential for the website to function properly. These cookies ensure basic functionalities and security features of the website, anonymously.
Functional
Functional cookies help to perform certain functionalities like sharing the content of the website on social media platforms, collect feedbacks, and other third-party features.
Performance
Performance cookies are used to understand and analyze the key performance indexes of the website which helps in delivering a better user experience for the visitors.
Analytics
Analytical cookies are used to understand how visitors interact with the website. These cookies help provide information on metrics the number of visitors, bounce rate, traffic source, etc.
Advertisement
Advertisement cookies are used to provide visitors with relevant ads and marketing campaigns. These cookies track visitors across websites and collect information to provide customized ads.
Others
Other uncategorized cookies are those that are being analyzed and have not been classified into a category as yet.
SAVE & ACCEPT